First published on BlogWatch on February 18, 2018.

I know some of you missed the two day conference last February 12 and 13, 2018 but you can watch the videos below:

The highlights of the conference can be gleaned by  quotable quotes from some of the resource speaker.

February 12, 2018 – Why Fake News and other Information disorders

Day 1 talked about the prevalence of disinformation and how it  affects democracy.

“The truth is a harder sell than the lies” – Cherian George, Centre for Media and Communication Research,  on the struggles facing journalists in the struggle to #FightDisinfo

“The problem in lying is also the drama. For journalists, how do you present truth better than lies”- Malou Mangahas, Philippine Center for Investigative Journalism

“Challenge for journalists is to discern and not peddle misinformation by the president” – Ellen Tordesillas, Vera Files

“Too many journalists perceive their roles as nothing more than stenographers, which results in amplifying the disinformation.”, Cherian George

BUHAY KA PA BA? Portrait of a president as a source of disinformation from VERA Files on Vimeo.

“Duterte is not just giving you information, but providing you drama… Duterte is giving you a performance.” – Ron Jabal, Public Relations Society of the Philippines

“Let’s get back to basics. We need to hold politicians to account; we are their employers.”- Peter Graste, University of Queensland

“Press freedom, not a privilege, as the president said, but a RIGHT. No one can tell us otherwise.” – John Nery, Philippine Daily Inquirer

“I think the period of intimidation is ending; there’s more and more courage. Organizing the Democracy and Disinformation conference itself is an act of courage”- Howie Severino, GMA News

“Someone is trying to break into your brain and into your heart.” –  Maria Ressa , Rappler,  sounds the alarm against state-sponsored trolling and disinformation

“You have to get rid of apathy;  If you want a safe space, build communities;  Collaborate” – Maria Ressa

” In journalism, we have internal standards and we can’t write whatever we want. When we make mistakes, we rectify them. We are accountable to the public we serve.” – Jamela Alindogan. Al-Jazeera

“The idea that we have to regulate fake news when we can’t agree on its definition is problematic. We have to use the same language to talk about the same issues”- Claire Wardle, First Draft News

“Demand [sources of information online] to prove their point. You have the right to ask for proof. Ask ‘where did they get this?’ Your mindset should be to always question.”- Juned, Sonido

“Peddlers of fake news use a lot of emotional hooks to do clickbait online”- Sun Sun Lim, Singapore University of Technology and Design

“The way we value news on social media is changing. It is more relational than informational “, Edson Tandoc, Nanyang Technological University

“Already the poor, marginalized, the oppressed may not be able to speak as loud and clearly. Few of them call attention of journalists, many of them suffer in silence.” Marvic Leonen, Associate Justice of the Supreme Court

“It is not always about you. If you all learn to live with this, then we may guarantee our fundamental freedoms, including the poor, marginalized – those who are invisible to all of us.”-  Marvic Leonen, Associate Justice of the Supreme Court

Watch the video. Listen to SC Associate Justice Leonen : They prey on the unenlightened… The demagogue thrives on dichotomies: The us vs they syndrome. They also thrive on instinct, passion, and the visual… They demonize their enemies often in order to dehumanize them. 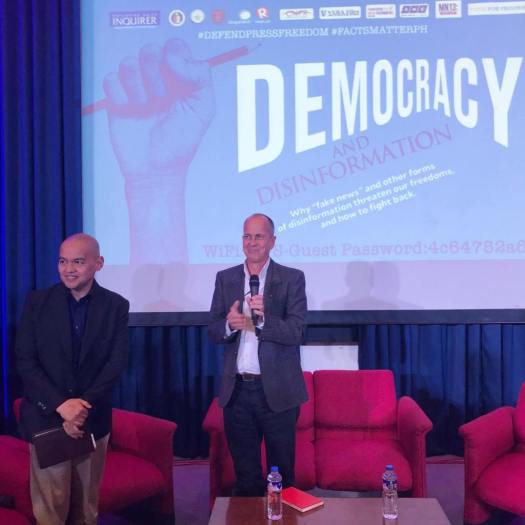 Day 2 discussed on best practices of media practitioners and fighting back disinformation.

“We are in this fake news architecture that a leader walks with no clothes and we are not doing anything “- Brother Armin Luisitro, De La Salle Philippines

“We don’t need numbers. Truth stands on its own. We need truth-tellers to tell the emperor that he has no clothes. Even if we just 11, let the dough rise.” – Brother Armin Luisitro,

“There is no substitute for actual contact and face-to-face interactions. We need to bring the stories to the fore”- Fr. Jett Villarin SJ

“Truth is the best defense. Whatever they attack you with, as long as stories are accurate and fair, you can fight the trolls.” – Ging Reyes, ABS-CBN

” We should focus on the masterminds of lies and stop focusing our time on the recipients. The 24-hour news cycle has forced us to become sprinters. We’ve paid the high price for that. We play catch-up with fact checking.” – Inday Varona,  Let’s Organize for Democracy and Integrity (LODI)

“We cannot demand the public to listen to us, we must listen to them as well, even if what they say sounds discomforting”- Inday Varona

“Community journalism is important. We have to think about how good journalism can reach the most vulnerable. We need to make people feel local issues are being represented “- Cheryl Ruth Soriano, De la Salle University

“I think eventually people will start distrusting Facebook as a source and will turn to something else”- Clarissa David, University of the Philippines

“Just keep  calling out. We call out as we see it; try to engage the administration”- Jane Uymatiao, Blog Watch

“I ‘m not for restricting those bloggers who are noisy. I defend everybody’s right to speak”- Jane Uymatiao

“There is a big issue with media bias. Even just choosing which event to cover can be considered a bias. Editorial judgment is being able to carefully choose what you think is important to the audience” – Ed Lingao , TV 5

“Discourse has to happen, discussion has to happen, arguments will happen, but you have to ask yourself  “does it deserve  my reaction?”. Choose your battles – Gang Badoy Capati, Citizen Safe

“Silence is not an option. I kept quiet for a while. I think it contributed to the violence” – Gang Badoy Capati

“I’m concerned that we have journalists that are forced to spend time dealing with trolls – and as a result they can’t focus enough on their own crucial work.”, Clarissa David

“Technology got us into this mess. We’ve created, through engineering, a system that isn’t working for us: disinformation. If we’ve engineered ourselves into it, we need to engineer ourselves out as well.”, Peter Graste

You can also read the highlights here:

Leonen on holding the line: ‘It involves knowing, critical analysis’

In fighting disinformation and trolls, silence ‘cannot be an option’ -From Wikipedia to Facebook, how do we fight back against trolls, ‘fake news’ and historical revisionism?

Filipinos fight back vs fake news”

Glimpses of the 2nd D&D Conference